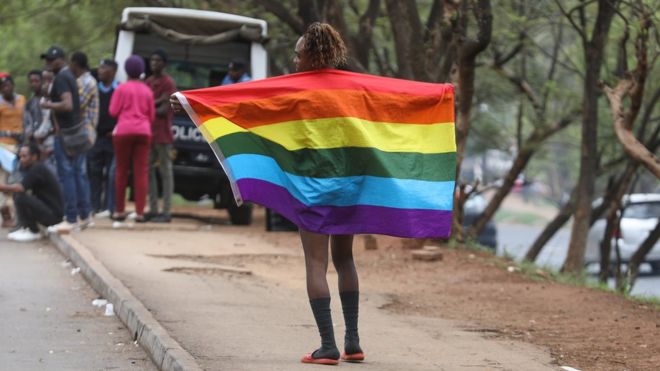 Gay sex is illegal in Kenya and the countries where the refugees come from, including Burundi and Uganda.The group had been living in temporary accommodation in the capital, Nairobi, after fleeing the refugee camp.Police with guns escorted the group on to buses on Wednesday night, photos sent to the BBC by the refugees show.

Last month Kenya’s High Court upheld a law criminalising gay sex.In a statement, the UN refugee agency said the Kenyan government had decided to send the group, which includes LGBT people and children, to the Kakuma camp in north-western Kenya.

When Frank found out he was gay they paid criminals to kill him. They tied him up and dumped him in a river. But he was rescued by shepherds and fled the country.He travelled through Rwanda and Uganda and eventually ended up in the Kakuma refugee camp, where, he says, he faced regular violent attacks for being gay and now has a huge scar on his face.

He travelled through Rwanda and Uganda and eventually ended up in the Kakuma refugee camp, where, he says, he faced regular violent attacks for being gay and now has a huge scar on his face.

Frank says at the end of 2018 a group of LGBT people were told by the administration of Kakuma camp that they were no longer able to protect refugees against homophobic attacks. Some people then started leaving the camp. He fled in April, and joined a bigger group of LGBT people in the capital, Nairobi.

But, Frank says, some of them were attacked by neighbours and last week the landlord threatened to evict them. They moved to another suburb of Nairobi but on Wednesday night two buses turned up, with no warning to take the group on the 14-hour journey through the night to the camp where he had fled attacks, he says.

“Wherever we have lived we face homophobia because of our orientation, we don’t know where to flee to.”

One thought on “Gay refugees sent back to ‘homophobic Kenya camp with a message “Kill them LGBTQ!””