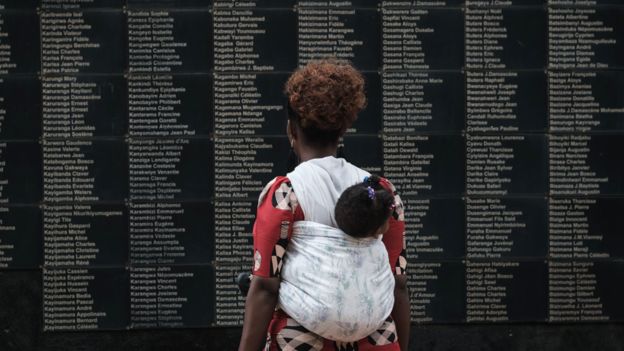 “My son kept asking who his father was. But among 100 men or more who raped me, I could not tell the father”Carine (Rwandan genocide rape victim)

Everyone in the community knows I was raped. There was nothing I could do about it,” she explains.

“My son kept asking who his father was. But among 100 men or more who raped me, I could not tell the father.”

“Rape is taboo. In most cases, the shame goes to the women instead of the man,”

Not having a father at home was not unusual: many other children may have been fatherless – more than 800,000 people were killed during the genocide in Rwanda in 1994. But they knew their father’s name.

He had heard the village whispers, and the names people would call him – but it would take years for him to finally learn the whole truth.

The story, his mother Carine says firmly, “is not something to take at one time”.

“He had heard different information. He heard gossip. Everyone in the community knows I was raped. There was nothing I could do about it,” she explains.

“My son kept asking who his father was. But among 100 men or more who raped me, I could not tell the father.”

She was about the same age as him the first time she was raped, one of hundreds of thousands mainly Tutsi women and girls believed to have been sexually assaulted by Hutu neighbours, militia and soldiers.

Carine finally told Jean-Pierre the whole story of his conception, and birth, when he was 19 or 20.

He has, he says, accepted it. But still, he feels there is a hole in his life where a father should be. Somewhat surprisingly, he feels no hatred towards the man who attacked his mother – but then, Carine has also decided to forgive.

“One of the things that made me most traumatised was thinking about them. When you forgive, you feel better,” she says, matter of factly.

“I have never been angry about him,” Jean-Pierre adds. “Sometimes I think about him: when I meet with life challenges I feel that I would love having a father to help me solve these problems.”

He plans on training as a mechanic and one day having a family of his own.

“I am planning to help my family as well,” he says, although all that takes money – and money is something in short supply.

As for Carine, she accessed counselling early, helping her bond with Jean-Pierre as he grew up: “I feel this is my kid now.”

Their closeness is easy to see as they sit on a step looking out over the rolling green hills from the door of their new home, bought with help from Surf.

But now things are calm. They feel accepted by both the family and community.

“They know I survived for a long time living with the trauma and I am happy here,” she says.

As for Jean-Pierre, he is full of pride for his mother and what she has achieved: “It is very hard to see but I was very happy with her progress.

“The way she accepted what happened. The way she thinks about the future and the way forward.”