(CNN)US President Donald Trump has issued a warning to Iran after the country moved to increase uranium enrichment beyond the purity threshold reached in a landmark nuclear deal Washington pulled out of last year.

Iran made the expected move last week, putting it out of compliance with the 2015 deal originally agreed under then-US President Barack Obama and five other nations. Tehran had earlier warned it would increase uranium enrichment if the deal’s European signatories did not help ease sanctions on its banking and oil sectors.
“Iran better be careful,” Trump said on Sunday.
“Because you enrich for one reason and I won’t tell you what the reason is. But it’s no good; they better be careful,” he said before boarding Air Force One in New Jersey.
Tehran has long maintained that it is not developing a nuclear weapons program and its enrichment and research is focused on non-military uses. 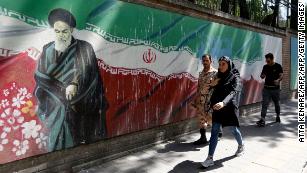 Iran exceeds uranium caps set by nuclear deal, foreign minister says
Iran’s President Hassan Rouhani warnedas early as May that Iran would no longer abide by some of its commitments limiting the production of fissile material, due to Washington’s own withdrawal from the agreement and increased diplomatic and military pressure on Tehran.
On Sunday, Iran announced it had begun enriching uranium past the previous limit of 3.67%. The level of enrichment then surpassed 4.5% on Monday, Behrooz Kamalvandi, the spokesperson for Iran’s Atomic Energy Organization, told Iranian news agency ISNA.
Inspectors from the International Atomic Energy Agency (IAEA) confirmed that Iran had exceeded the 3.67% mark on Monday, according to IAEA spokesman Frederik Dahl.
Later on Monday, France announced it was dispatching a top diplomat to Tehran to try and de-escalate tensions over Iran’s nuclear program, a spokesperson for French President Emmanuel Macron said.
The spokesperson said Macron’s diplomatic adviser Emmanuel Bonne would travel to Tehran on Tuesday, adding that France will work towards resuming dialogue between all parties by July 15.
France is increasingly acting as an intermediary in the Iran-US standoff. According to White House spokesman Judd Deere, Trump also spoke with Macron over the phone on Monday, where “they discussed ongoing efforts to ensure that Iran does not obtain a nuclear weapon and to end Iran’s destabilizing behavior in the Middle East.”
Iran is facing increasing pressure from Washington and its allies, amid intense hostility from Washington and disputes over shipping in the Persian Gulf and nearby waters.
Last week, British forces stormed an Iranian tanker in the UK territory of Gibraltar, saying it was believed to have been carrying oil to Syria, in possible violation of European Union sanctions.
Mohsen Rezaee, who is currently Secretary of the Expediency Discernment Council — an advisory body to Iran’s Supreme Leader — tweeted that “if the UK does not release the Iranian oil tanker, our officials are duty-bound to reciprocate and seize a British oil tanker.”