We just stayed on the basketball court, and we started playing and there and behold I fell in love with the game,” he added.

I’m really appreciative that I’m here because I shouldn’t be…I’m from Zaria in northern Nigeria, and I find myself getting calls from presidents…,” he said during his year-end conference on Tuesday.
Ujiri also announced that his future is with the Raptors, quashing rumors of a departure to another team.
“I love it here. My family loves it here. My wife loves it here, which is very important. My kids are Canadians. You want to win more. … In my mind, I’m here,” Ujiri said during the conference at Toronto’s OVO Athletic Centre.
Ujiri’s love for basketball led to a brief stint as a player in Europe. However, he admits he was never a great player.
“I wasn’t making any money. I wasn’t performing to my standards of what I wanted in my life at the time, and so I decided I wanted to go into coaching,” he told CNN.
His first coaching role was with the Nigerian Junior National Team, and through sheer determination and grit, he soon found his way to the big leagues in the NBA.
“Once I started working with the youth, I just realized that there is something about finding talent …There is something about discovering the kid that can play,” he says.
His first coaching role at the NBA was with Orlando Magic — an unpaid position which allowed him to network with the best in the game.
“I would scout with all these scouts, and then I’d head to the hotel and go network with them. Then everybody would go up to their 5-star hotel, and I would sneak to my $20 a night motel,” he says.
In his talent spotting career, Ujiri has scouted some of the best and most talented NBA players such as Cameroonian Pascal Siakam, who came up big in the final game for the Raptors with 26 points and 10 rebounds. 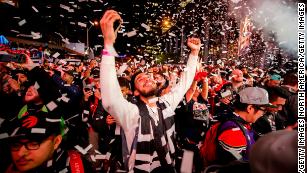 Toronto Raptors fans willed first NBA title success ‘into existence’
He also got Kawhi Leonard — named NBA Finals Most Valuable Player in 2004 — to join the team by trading arguably the Raptor’s biggest star, DeMar DeRozan, to the San Antonio Spurs.
“I’ll tell you, Pascal Siakam came to Basketball Without Borders, and I couldn’t tell if Pascal was an NBA player. And look at him now, he’s blossoming into becoming a star player in the NBA,” Ujiri says.
Basketball Without Borders is the NBA’s global development program which has been running since 2001, with 52 camps staged in 27 countries and on six continents, according to information on its website.
Like Ujiri, Siakam didn’t discover basketball until his teens. And Ujiri says there continues to be missed opportunities to discover and develop talent on the continent.
“We lack the facilities in Africa, so it doesn’t give the kids a chance. Look at just the physical abilities of Africans, how tall they are,” Ujiri said.
“You think of the tribes, the different places and how many seven footers are walking around, but these guys have gone through their whole life without playing the game. I say that there is talent in Africa walking everywhere. It’s a gold mine,” he adds.
In 2003, Ujiri founded his non-profit, Giants of Africa to further mine this talent. 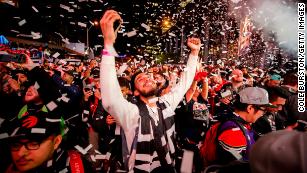 A Canadian invented basketball — and his hometown erupts with joy after Raptors’ historic win
But it’s more than just finding players for Ujiri; it’s about inspiring young Africans that they too can aspire to excel in basketball, in a continent that’s primarily dominated by football.
“I need more people to see that it can be done, whether it’s coaching, whether it’s scouting, whether it’s playing. Whatever it is, people can see that yes, it can be done by an African. It’s something that I really take pride in,” Ujiri says.
The NBA seems to agree with Ujiri’s assessment of Africa. Earlier this year it announced it would be launching The Basketball Africa League, the first league the NBA will be operating outside of North America.
Ujrii sees this as just the beginning.
“With this league, the opportunities for the players, their clubs, and their countries will just continue to grow, and I’m really proud the NBA is leading the way,” he says.