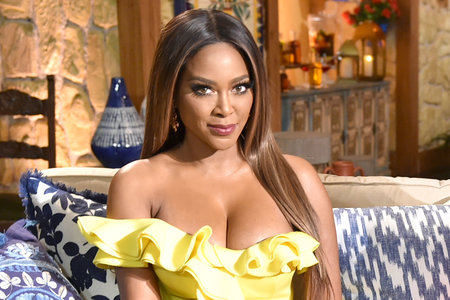 As you can see, Kenya is coming in hot for RHOA Season 12!

Kenya took to Instagram to address her return to the series, confirming the news with a photo of herself holding a peach as the RHOA ladies always do in the opening to each episode. “I was hungry so I snatched a [peach],” Kenya captioned the fierce pic, which featured her in a gorgeous black gown with cutouts on her waist and a large slit to show some leg.

“I was disappointed [not to be on the show again],” she told PEOPLE. “It broke my heart but with all the stress, I don’t know how I could have done it.”

“I’m hopeful that door isn’t closed for the future,” she added. “I think fans want to see this next chapter, and I’m ready to show them.”

Fans of Kenya Moore are going to hear that Kenya Moore has officially gained her peach back – and she showed it off via her Instagram account on Wednesday.

We revealed months back that the new mother had signed back on for season 12, after season 10 when contract negotiations reportedly fell through. She made a brief appearance during season 11 when she turned up for an event to support pal Cynthia Bailey – which caused a rift between Nene Leakes and Cynthia.