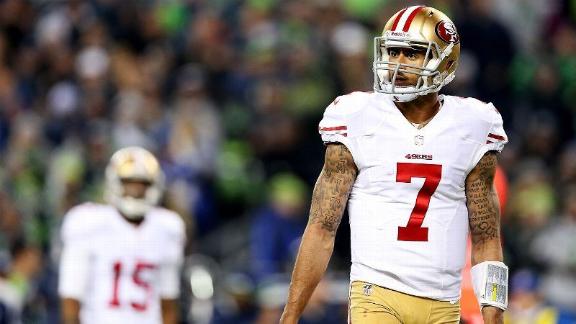 TMZ.com reported earlier Thursday that Kaepernick is being investigated for an alleged sexual assault, citing law enforcement sources. No arrests have been made, and no charges have been filed.

Miami police told the San Jose Mercury News there was “no evidence” of a sexual assault and said TMZ took the report out of context. Police would not describe the exact nature of the investigation when contacted by ESPN.

Colin Kaepernick (@Kaepernick7) April 11, 2014According to an incident report filed with Miami police, an unnamed woman said she had an encounter with Kaepernick, 49ers wide receiver Quinton Patton and Seattle Seahawks receiver Ricardo Lockette on April 1 at the Viceroy hotel in downtown Miami. The woman told police she spent time with the three players, drinking and smoking marijuana in Lockette’s apartment and eventually ending up in a bedroom with Kaepernick.

The woman was taken to the hospital by Fire Rescue on April 2, Miami Fire Lt. Ignatius Carroll said Friday, according to the Miami Herald. The woman said she awakened with no memory of how she arrived at the hospital, Miami police said. A rape test was performed, according to the Herald, but the results have not been made public.

Kaepernick’s agents, XAM Sports, released a statement Friday afternoon: “We stand by Colin 100 percent and are fully confident that the truth will be evident once the facts come to light regarding this matter. Thank you for supporting Colin.”
San Francisco 49ers quarterback Colin Kaepernick took to Twitter on Friday morning to address a TMZ report that alleges sexual assault, calling the story “completely wrong.”

(1/3) The charges made in the TMZ story and other stories I’ve seen are completely wrong. They make things up about me that never happened.

– Colin Kaepernick (@Kaepernick7) April 11, 2014(2/3) I take great pride in who I am and what I do, but I guess sometimes you have to deal with someone who makes things up.

– Colin Kaepernick (@Kaepernick7) April 11, 2014(3/3) I want to thank all of the people who have shared their encouraging sentiments. I assure you that your faith is not misplaced.

There are more developing news to this story and we will continue to follow up on this story.