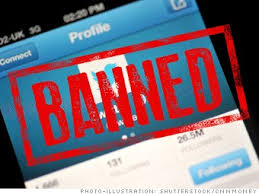 I got a letter from Twitter indicating that there was certain information that NYPD considered to be confidential and bullying,and that wasn’t the case.They sent me the post that they claimed is confidential and in violation their policies.The publication they claimed was violating their policy wasn’t  my writing but someone else that I quoted.After many years of NYPD trying to silence me from speaking and making progress in the public,I am still doing exactly that today. They tried to impose their powers on me and affected my business endeavor, I am still afloat and moving strong. In fact, I picked up some steady credit courses that will really insert my presence in the next future.When this entire process started, I already figured out what my next move was going to be,and how I was going to approach it.I was prepare before they were prepared, and as always I never stay unprepared but prepared.

Anyone who have studied activism,and studied those who really did it in the past,what you will realized they were attacked financially and socially as well.To them it is expected,It is stated in their biography and how they overcame it.The degree of Activism many called Political Activist, it is naturally risky by nature.Especially the type that has to do with racial discrimination like Whites and Blacks and White Police Officers,and the oppression of African Americans.

They tried to tarnished my reputation and that didn’t happened cause I control that and nobody controls it.They used their influences through their own kind of people to obstruct my influence but that still didn’t work.They thought I will be fearful when they started following me.They didn’t know who they were dealing with at the start,so they had to learn the hard way as they follow me.There is saying I remembered,”NEVER ALLOW TOO CAUSE YOU MIGHT EXPOSE OF YOURSELF TO THE PUBLIC AND THEY CAN USE IT AGAINST YOU.”

Almost 5 years plus, we still on the ups and downs,and the more they come at me, the more I applied the 5 laws of activism.Look,I didn’t start activism out of the blue, I dreamt of being the next Malcolm X or even better than him.I studied this craft to the fullest,and I know the outcome it brings to anyone, and I know how to still afloat through it.One thing Malcolm X shared was staying educated,and keep educating yourself.Those words are the basis of how I still afloat today.

The more educated I get the more fearful they become toward me.They’ve tried to influence my educational institution with all kinds of snitch lies.After the semester was over those who knew me began to realized that I was never what these White NYPD Officers told them.I didn’t exactly as I was told to do, and that is to go in there and make those grades.I did exactly that, and I planned to further my studies even more.My business are steadily progressing as I am progressing as well.When all is said and done they will be watching greatness at it best.