Huge crowds of about 200 protesters converged Friday evening and marched on and near the major corridor of 125th Street, meeting at the corner of Frederick Douglass Boulevard.

A protest over the policing of New York City’s subways briefly shut down busy Harlem subway stations during rush hour, with many people placed in handcuffs amid the demonstrations.

The New York Police Department tweeted around 7 p.m. that there were traffic and mass transit disruptions in the area. 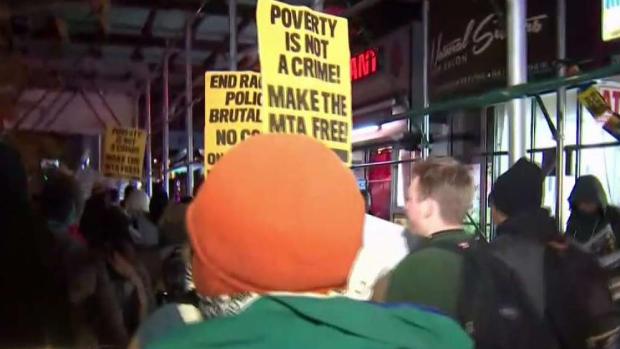 The protesters are upset with the NYPD’s recent tactics in the city’s subways against farebeaters and especially food vendors. The protest comes just weeks after a similar display in Brooklyn. NBC New York’s Myles Miller reports.

A half-hour earlier, NYC Transit tweeted subways on the 4,5 and 6 lines were bypassing their Lexington Avenue-125th Street station for a time, then resumed stopping while police barred entry to the station for a while afterward.

The protesters are decrying what they consider heavy-handed law enforcement in the subways, which has led to the arrests of multiple food vendors and even police pulling their guns on a teenage fare-evasion suspect.

Two women selling churros in the subways were arrested earlier in November, and another man selling candy bars was arrested at a Harlem station.

“It’s like police harassing working class people that are trying to find income trying to find a way to get by in an economy that doesn’t work for them,” said one participant.

The demonstrations were not exclusively targeted at the NYPD, however. Many displayed displeasure at Gov. Andrew Cuomo’s plan to hire 500 MTA officers to aid in policing the subway, done in an effort to battle fare evasion and rampant homelessness.

Many of those who were put in handcuffs during the protest refused to get up. An NYPD spokesman said that 57 people had been arrested as a result of the protests. It was not immediately clear where they were being held. 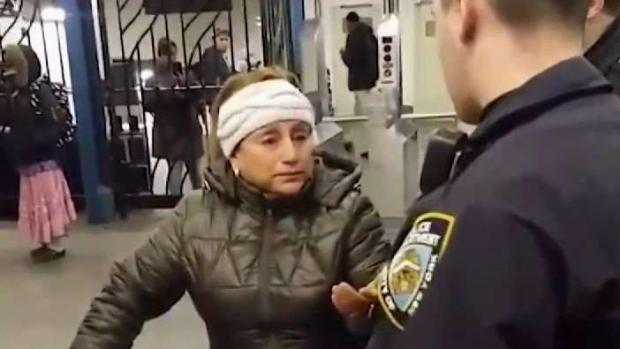 Despite the outrage that has been growing in Brooklyn over the video, NYC Mayor Bill de Blasio said he reviewed the video and believes the officers involved handled the situation appropriately. NBC New York’s Jamie Roth reports.

The march, organized by a group called Decolonize This Place, comes three weeks after similar protests in Brooklyn. Crowds there rushed subway stations in downtown Brooklyn. Only one person was arrested in those demonstrations, a protester who spit on a police officer.