The NYPD released the video Friday as part of what it says is an effort to let the public see body camera footage more quickly.

The video shows 39-year-old Gregory Edwards being arrested by officers after allegations he had beaten his girlfriends. Edwards “immediately became combative” with cops attempting to subdue him, leading to one of the officers firing his Tazer, which failed.

Immediately after, Edwards is seen on footage taking out a gun and can be heard firing it twice, striking 30-year-old Officer Vanessa Medina in the hand. She was later treated at a hospital and released on September 18. 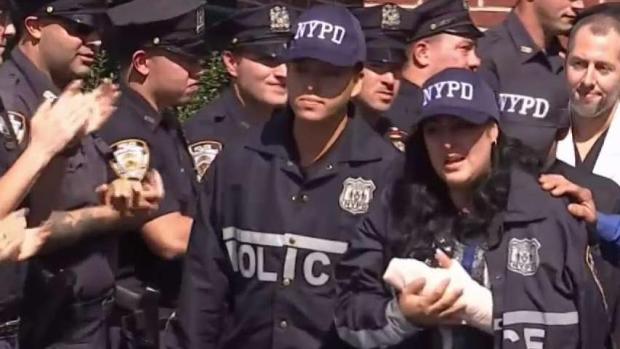 While the medical examiner says the suspect killed in the Staten Island shooting was struck by two bullets, hitting his heart and right lung, the cop who was hit in the thumb was released from the hospital. NBC New York’s Erica Byfield reports.

Officers quickly responded and pulled out their firearms, shooting three times and killing him. The medical examiner’s office later said Edwards’ heart, aorta and right lung were damage by the gunshots.

An organization that was representing Edwards in court had previously called for the release of body camera footage of the scrum, as well as the officers’ names.

A new department policy calls for footage to be released within 30 days of a major incident in most cases.

On Tuesday, the NYPD rejected a Freedom of Information Law request from The Associated Press for the footage from the Sept. 17 incident.