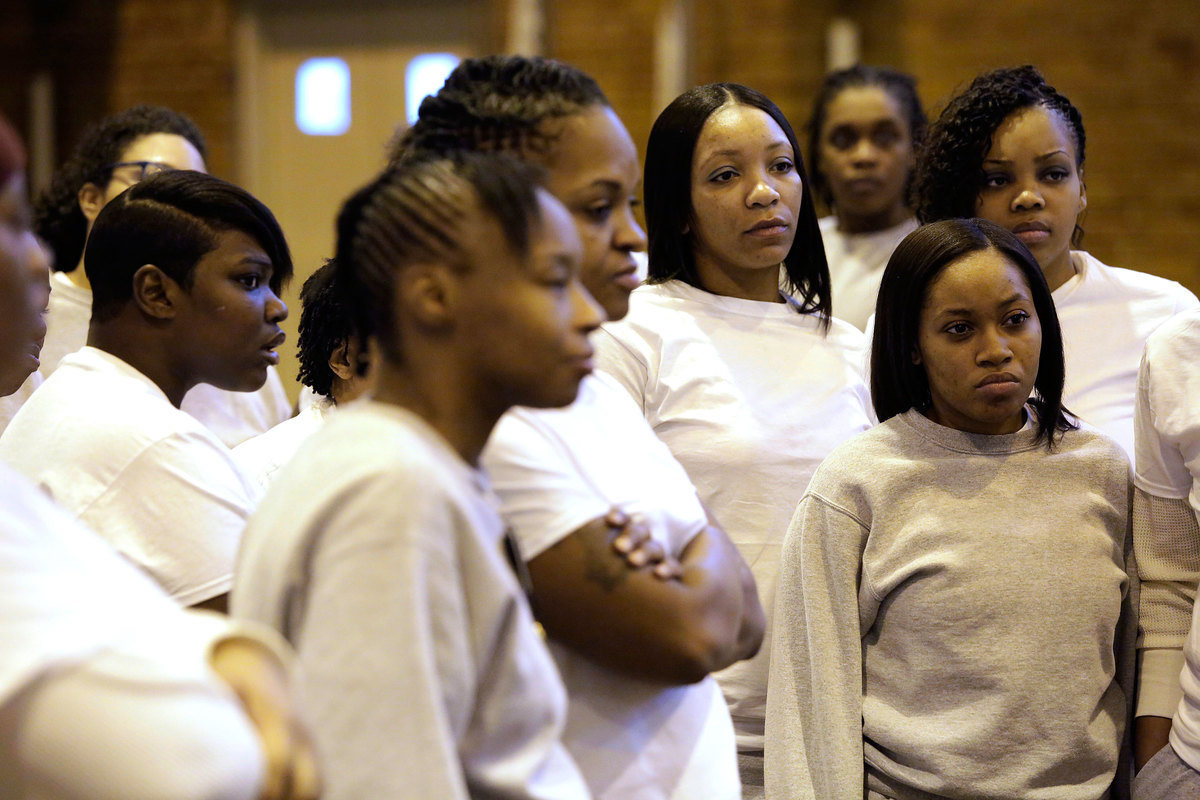 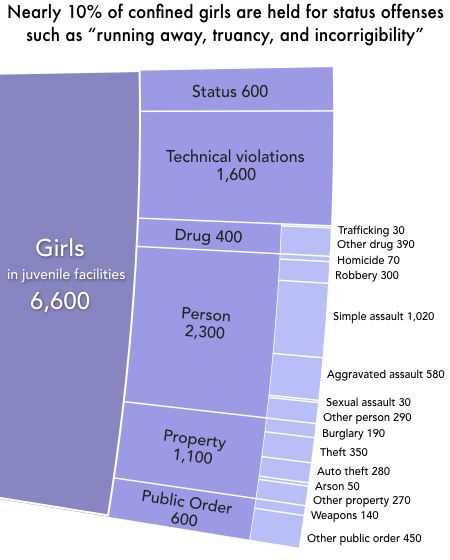 Of the girls confined in youth facilities, nearly 10% are held for status offenses, such as “running away, truancy, and incorrigibility”. Among boys, such offenses account for less than 3% of their confined population. These statistics are particularly troubling because status offenses tend to be simply responses to abuse.

As is the case with women, girls of color and those who identify as LBTQ are disproportionately confined in juvenile facilities. Black girls account for 35% of the confined girls population, and Latina girls account for another 19%, while white girls are only 38% of those locked up. And while LBTQ women are also disproportionately represented in the adult correctional systems, a staggering 40% of girls in the juvenile justice system are lesbian, bisexual, or questioning and gender non-conforming. (The comparable statistic for boys is just under 14%.)

While society and the justice systems subject all girls to stricter codes of conduct than is expected of their male peers, Black girls in particular shoulder an added burden of adultification — being perceived as older, more culpable, and more responsible than their peers — which leads to greater contact with and harsher consequences within the juvenile justice system.

Three out of four women under control of any U.S. correctional system are on probation. Probation is often billed as an alternative to incarceration, but instead it is frequently set with unrealistic conditions that undermine its goal of keeping people from being locked up.For example, probation often comes with steep fees, which, like bail, women are in the worst position to afford.

Failing to pay these probation fees is often a violation of probation. Childcare duties further complicate probation requirements that often include meetings with probation officers, especially for women with no extra money to spend on babysitters or reliable transportation across town.It is perhaps then no surprise that formerly incarcerated women are also more likely to be homeless than formerly incarcerated men, making reentry and compliance with probation or parole even more difficult.

All of these issues make women particularly vulnerable to being incarcerated not because they commit crimes, but because they run afoul of one of the burdensome obligations of their probation or parole supervision.

The picture of women’s incarceration is far from complete, and many questions remain about mass incarceration’s unique impact on women. This report offers the critical estimate that a quarter of all incarcerated women are unconvicted. But — since the federal government hasn’t collected the key underlying data in a decade — is that number growing? And how do the harms of that unnecessary incarceration intersect with women’s disproportionate caregiving to impact families? Beyond these big picture questions, there are a plethora of detailed data points that are not reported for women by any government agencies, such as the simple number of women incarcerated in U.S. Territories or involuntarily committed to state psychiatric hospitals because of justice system involvement.

While more data is needed, the data in this report lends focus and perspective to the policy reforms needed to end mass incarceration without leaving women behind.

Women’s incarceration has grown at twice the pace of men’s incarceration in recent decades, and has disproportionately been located in local jails.Frustratingly, even as this report is updated every year, it is not a direct tool for tracking changes in women’s incarceration over time because we are forced to rely on the limited sources available, which are neither updated regularly nor always compatible across years.This report provides a detailed view of the 231,000 women and girls incarcerated in the United States, and how they fit into the even broader picture of correctional control.the disaggregated numbers presented here are an important step to ensuring that women are not left behind in the effort to end mass incarceration.

Quarter of Women behind bar aren’t yet convicted

A staggering number of women who are incarcerated are not even convicted.Quarter of them who are behind bars have not yet had a trial.60% of women in jails under local control have not been convicted of a crime and are awaiting trial. Aside from women under local authority (or jurisdiction), state and federal agencies also pay local jails to house an additional 12,500 women. For example, ICE and the U.S. Marshals, which have fewer dedicated facilities for their detainees, contract with local jails to hold roughly 5,600 women. So, the number of women physically held in jails is even higher.

from 2016 to 2017, the number of women in jail on a given day grew by more than 5%, even as the rest of the jail population declined.It could be due to increases among women in arrests, pretrial detention, case processing times, punishment for probation or parole violations, or jail sentence lengths – or any combination of these factors. Of all these possible explanations, only arrest data are reported annually and by sex.

Women are disproportionately stuck in jails

Avoiding pre-trial incarceration is uniquely challenging for women. The number of unconvicted women stuck in jail is surely not because courts are considering women to be a flight risk, particularly when they are generally the primary caregivers of children. The far more likely answer is that incarcerated women, who have lower incomes than incarcerated men, have an even harder time affording money bail. When the typical bail amounts to a full year’s income for women,it’s no wonder that women are stuck in jail awaiting trial.