ICYMI, Mike Epps and his wife Kyra Robinson Epps just introduced their new bundle of joy to the world!

“Allow us to introduce to you our newest addition to the family……..INDIANA ROSE EPPS,” the 49-year-old comedian wrote in the caption of a video of his youngest daughter. “She rollin her eyes all ready we are so greatful God thank you for a healthy baby!”

Allow us to introduce to you our newest addition to the family……..INDIANA ROSE EPPS she rollin her eyes all ready 😁❤️❤️❤️❤️ we are so greatful God thank you for a healthy baby!

Baby Indiana made her grand entrance into the world on March 12th and Kyra also shared a picture of her new bundle of joy.

“My Indiana Rose Epps! 9 pounds 12 ounces on 3/12. Mommy loves you beyond what I can even understand. #tired,” the 35-year-old producer captioned a picture of herself holding her precious baby girl.

Honestly she looks just like her mom and dad. Singer/new-mom-again Christina Milian had Epps comments section poppin’ however after she commented this: “So beautiful. So exotic! Wow”

One person wrote : Exotic is not a proper term. It contributes that a someone is only beautiful because of possible European features. Plus it’s a derogatory and outdated term.

While another wrote: what did ya’ll expect from a racially ambiguous woman. 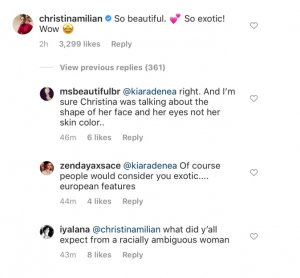